My local area in King Township newspaper in the Arts & Entertainment section
It's focused on how I represent women and all people in strong powerful roles through my illustrations. 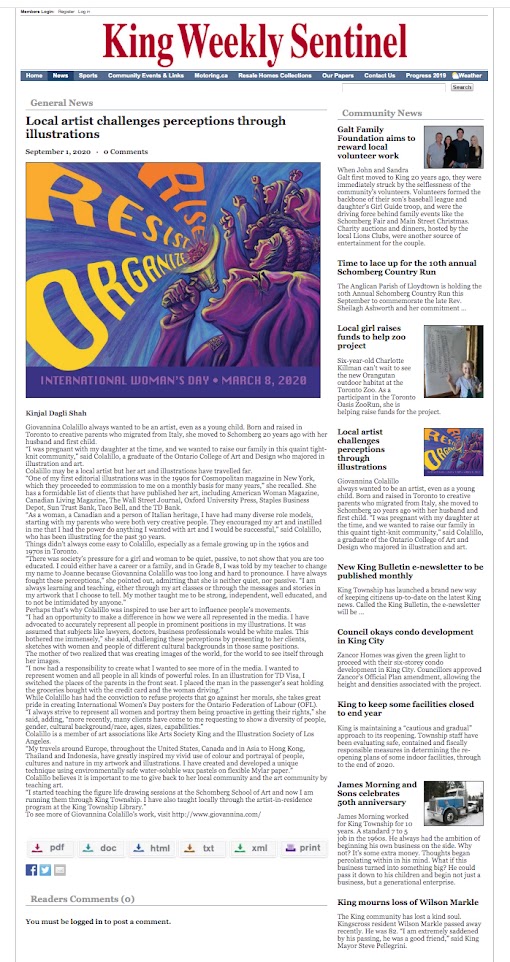 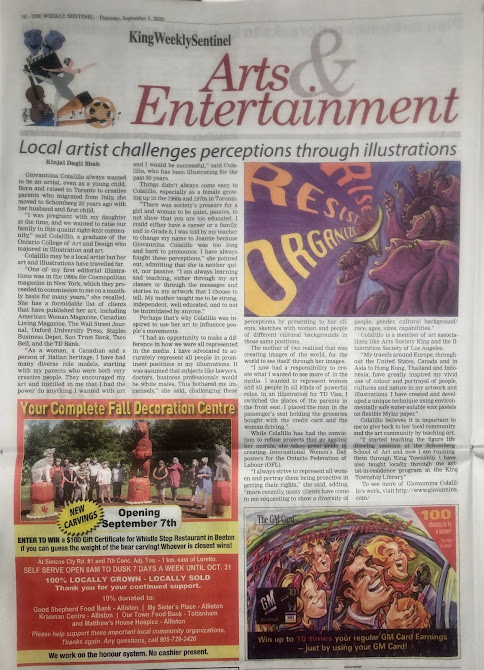 Posted by Giovannina Colalillo at 3:30:00 pm No comments:

"For the Love of It"

Very humbled and excited about an interview article on my career as an illustrator.
Another one of my illustrations is featured for the article
"Playing our Song", written by my good friend writer
Dorita Peer
King Mosaic magazine is produced and edited by Arts Society King
See magazine on-line at
http://www.artssocietyking.ca/uploads/2/4/6/8/24682787/mosaic_summer_2020_lowres.pdf 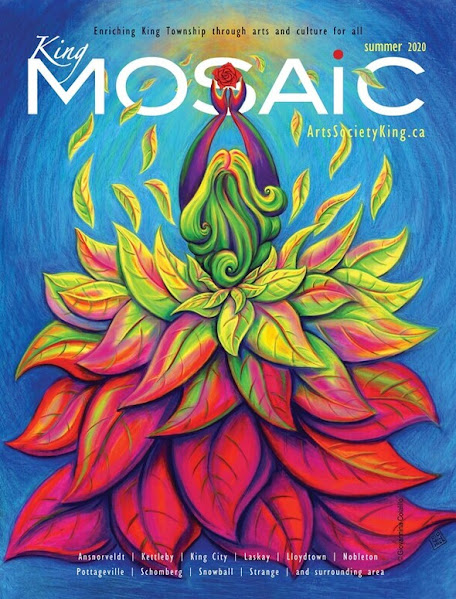 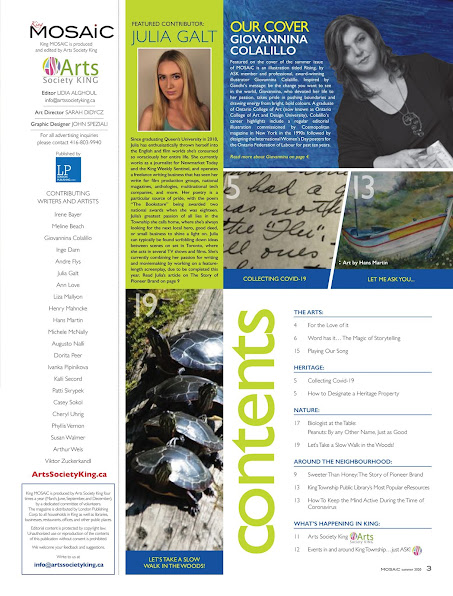 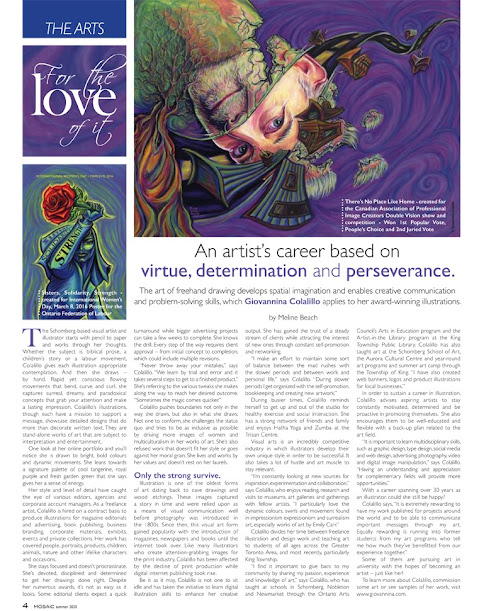 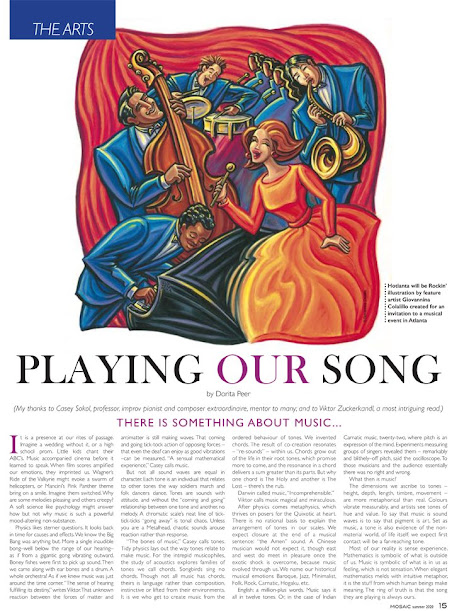 Posted by Giovannina Colalillo at 3:16:00 pm No comments:

Photographers and illustrators are paired together
to create portraits of each other in a conceptual theme. 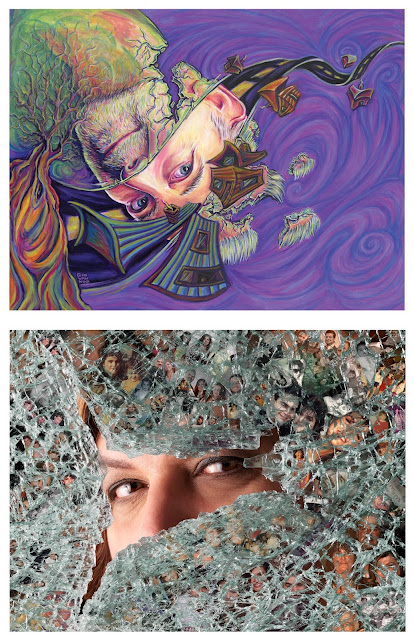 Quote:
“…everything has a past. Everything – a person, an object, a word, everything. If you don’t know the past, you can’t understand the present and plan properly for the future.”- Quote by Chaim Potok, Davita's Harp

Collaborative Concept:
The concept for these portraits came from Matthew describing his experience in the hospital while on the pain killer fentanyl after a serious fall. He had a very vivid hallucination that mind and body were shattering, pixelating and dissolving into the ether, one tiny square at a time. Giovannina was heading into hospital later in the month for some surgery on her eye and was more than a bit concerned. The notion of shattering, aging and memories became central to our portraits.

Much of Matthew’s personal work over the past few years has focused on the passage of time. Giovannina has woven elements from his artwork and his description of the hallucination into an intriguing portrait. The houses, road and tree in her work are all elements from Matthew’s photographic project about a neighbourhood lost to demolition near the Ambassador Bridge in his hometown of Windsor.  Giovannina used the image of one of the trees that remained after demolition to represent the tree of life- stability and endurance.

He used the shattered glass and the shard overlapping her eye as a vehicle to weave in many, many of the visual memories that she has broken through. 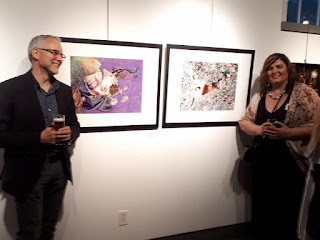 Posted by Giovannina Colalillo at 7:27:00 pm No comments:

I created the International Women's Day poster and pin for the 9th year
for the project developed by the OFL Ontario Federation of Labour.

Posted by Giovannina Colalillo at 7:09:00 pm No comments: 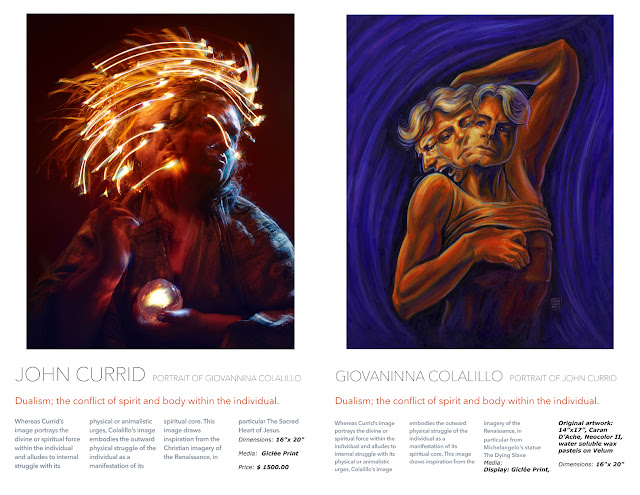 Dualism: The conflict of spirit and body within the individual.

Whereas Currid's image portrays the divine or spiritual and alludes to internal struggle with its physical or animalistic urges, Colalillo's image embodies the outward physical struggle of the individual as a manifestation of its spiritual core. Currid's image draws inspiration from the Christian imagery of the Renaissance, in particular The Sacred Heart of Jesus. Colalillo's image draws inspiration from the imagery of the Renaissance, in particular from Michelangelo's The Dying Slave sculpture.

DOUBLE VISION is an annual competition and exhibition that pairs professional image creators from across Canada by random draw and challenges them to create portraits of one another. Pairs will be judged by a panel of art industry professionals and prizes awarded to the winners of both juried and popular votes. All works submitted for this unique and creative challenge will be on display for the course of the exhibition.

CAPIC EXHIBITION 2018 is on display April 5th to April 15th at The Papermill Gallery at 67 Pottery Rd, Toronto.

The Toronto Chapter of The Canadian Association of Professional Image Creators (CAPIC) is pleased to present a trio of annual exhibitions showcasing photographers, illustrators, and image creators from across Canada.

Posted by Giovannina Colalillo at 3:29:00 pm No comments: 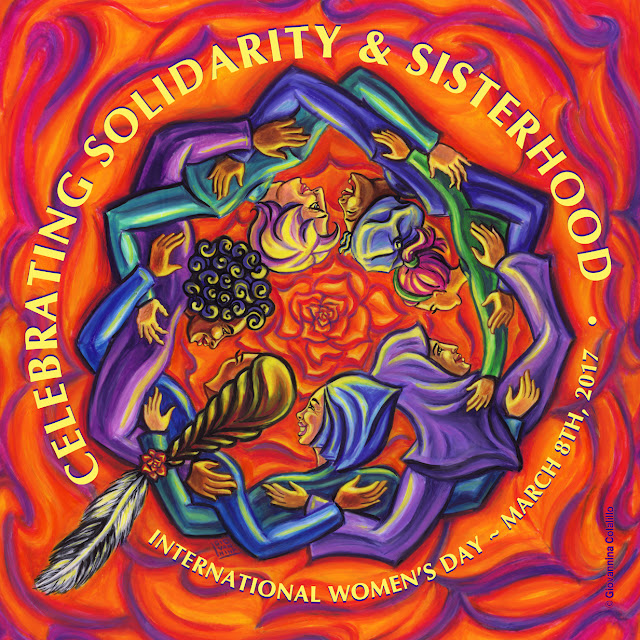 This is the poster I created for this years
International Women's Day,
March 8, 2017 for the
Ontario Federation of Labour

Get your poster or Pin at:http://ofl.ca/…/unveiling-international-womens-day-poster-…/

Your union is invited to participate in the seventh year of our exciting March 8th Project developed by the OFL Women’s Committee celebrating International Women’s Day (IWD). This year’s theme is “Celebrating Solidarity and Sisterhood”. Both the pewter pin and poster are a work of art that our members and community partners will value for many years to come.
The pin is sold at cost plus 25 cents. Any surplus of this added cost will be donated to a provincial women’s organization recommended by the OFL Women’s Committee to the OFL Executive Board. Last year’s surplus funds went to support the following organizations:

• Equal Pay Coalition’s Equal Pay Day Campaign
• CBTU Summer Youth Program: OFL sponsored 5 girls to attend
• OCBCC – Child Care Worker and Early Childhood Educator Appreciation Day
• Northwestern Ontario Women’s Centre
• Ontario Native Women’s Association (ONWA)
• Co-sponsor launch of Rise Up! A Women’s History Digitizing Project.
The price per pin for orders of 500 or more is $3.50. Orders of less than 500 is $3.75 per pin. Unions that place orders of 500 or more pins will have their union logo added to the poster. Posters (11×17) will be available in limited quantities in both English and French for $1.00 per poster. All orders must be placed by February 11, 2017 in order to have the pins produced and shipped in advance of IWD.
This year, for your convenience, we have arranged an online order and payment option. Click the following link to order your 2017 IWD Pins and Poster – (English) or (French).
If you prefer not to use the online option, you can download and order form by clicking here and return with your payment by mail to:
Ontario Federation of Labour, 202-15 Gervais Drive, Toronto, ON M3C 1Y8. Attn: Kathy Neumann.
If you have any questions, please contact Kathy at 416-443-7674.
Below is the unveiling of our 2017 IWD poster and pin design!
Posted by Giovannina Colalillo at 6:24:00 pm No comments:

We won the CAPIC Double Vision art show contest for the Popular Vote!! 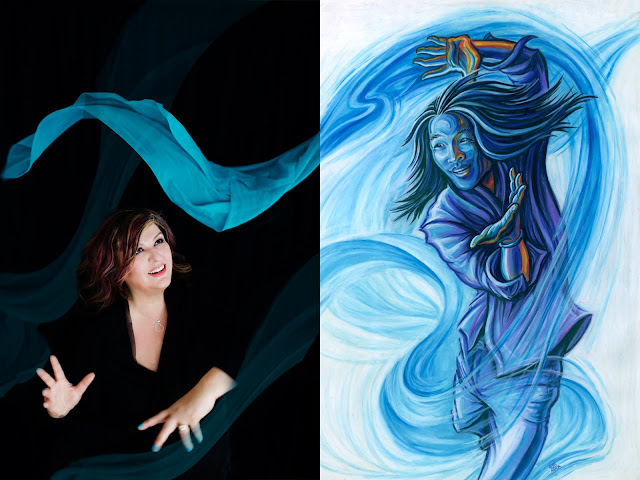 CAPIC's (The Canadian Association of Professional Image Creators)
Double Vision is a unique exhibition where image creators are paired up by a random draw,
to create a unique and creative portrait of each other.
Posted by Giovannina Colalillo at 5:33:00 pm No comments:

I am Thrilled to Announce

Barbara Spurll and I Won

CAPIC's Double Vision is a unique exhibition where image creators are paired up by a random draw, to create a unique and creative portrait of each other 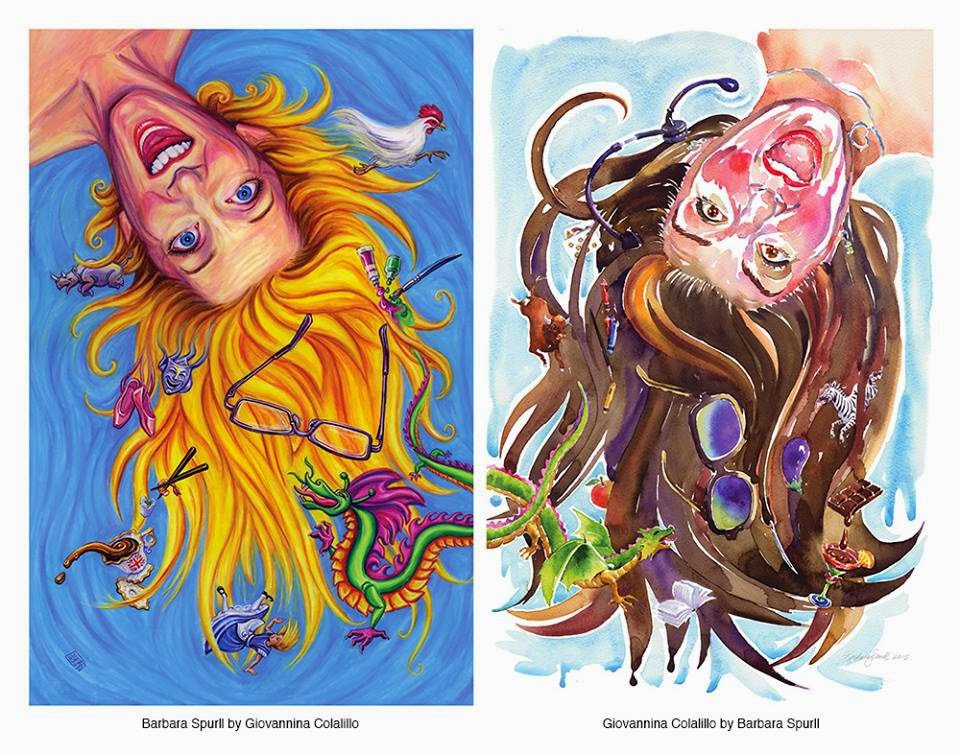 The Portraits are titled

Streaming
In collaboration, we shake our inverted heads revealing important aspects of ourselves.  These cascading elements symbolize us, as in the headset representing Giovannina’s love for talking as she draws and paints and Alice in Wonderland representing Barbara’s love for theatre and storytelling. Linking us together is our common Chinese Zodiac sign, the dragon.

The Gala opening and competition took place on Tuesday, Feb. 24th, 2015, 6:30 - 10 pm, at the Arta Gallery in the Toronto’s trendy Distillery District.

CAPIC is the collective voice and advocate for professional photographers, illustrators and digital artists in Canada. 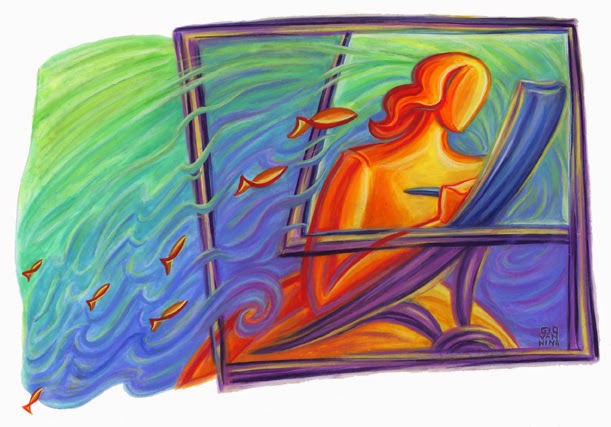 This Illustration was originally created for Industrial Accident Prevention Magazine, titled Swimming Upstream in the Eye on Ergonomics section

Residents of King Township will find it attached in the centre of the King Mosaic Magazine
http://www.kingmosaic.ca

List of art classes I will be teaching this summer